The more we discover, the less we know

One of the experts interviewed is my adviser and fellow blogger, baldscientist.

Posted in Biology Awesomeness, Links to other places I either like or have captured my interest

If you know me, you know that two of the most important things in my life are my faith and my love of science particularly life science.

You might also know that Bill Nye the Science Guy and Ken Ham (the fellow that is the force behind the creation museum where people and dinosaurs lived together).  It is only natural to think I would have watching this great debate on my agenda but you would be mistaken because I will not be watching this for several reasons. A few are as follows…..

These two men are basing their position using two different and opposing sets of rules. Creationism is part of Ham’s faith and hypothesis testing is central to Nye’s scientific method.  Evidence-based faith is an oxymoron and faith-based science is a contradiction of terms.

Although I am a Christian and believe that evolution is a fact, my faith is not affected by this nor does my faith hurt my ability to look unbiasedly at evidence.  Others do feel threatened, however, and I’m not sure a spectacle like this is the way to persuade someone that is afraid of what I consider the truth.

That’s enough for now but if you have anything to add, feel free to contribute.

Posted in Biology Awesomeness, My faith and my science coexist peacefully, My flavor of Christian, Uncategorized

There are three Greek words for life in the Bible

When I was a kid, I was told Eskimos (pardon to the First Nations peoples of the Arctic) have 20 words for what is snow in English.  The logical conclusion was that snow is a large part of these people’s lives and they need more descriptive and practical words for what all gets translated into the English word snow than some white kid living in the suburbs of Philadelphia.  Getting back to the point, the Bible has three Greek words for what is translated to “life.” I will not be studying the original Hebrew words right now but perhaps another time.

The three words are Bios, Psyche, and Zoe.

I have two degrees in Biology and a minor in Psychology so those two words have obvious English parallels but in my world, Zoe is a girl’s name.

Bios, Psyche, and Zoe are like body, soul, and spirit.

Bios is our physiology, all the processes involved in maintaining homeostasis so we can stay alive. That is Bios; our physical life.

Psyche is our selves, who we are, our personality. Our being, Psyche, is our soul.

There are three types of live that correlate to the three types of love found in the Greek, eros (physical love) phileos (brotherly love or a reciprocal sort of love and agapos which is a pure love that is unconditional.

I am so blown away at the fact that some very fortunate things are alive which is why I love Biology. Psychos and Zoe, look out! 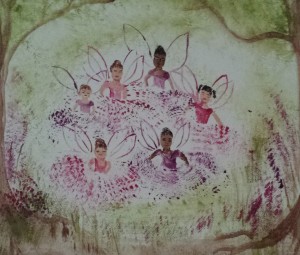 Posted in Biology Awesomeness, My faith and my science coexist peacefully, My flavor of Christian, Uncategorized

The man on the moon, The Fusiform Gyrus, and The Invasion of the Body Snatchers

My regular readers, if I have any, are likely wondering what the hell Debra has been smoking recently but, rest assured, these things go together like peas and carrots.

I am going to discuss visual pathways and prosopagnosia at the Neuroscience Journal Club at West Chester and I haven’t looked at my notes for a good week so constructing this post will help. Note: I have been unsuccessful getting the photos where I want them so if the post looks good, it will be a bit more of an accomplishment than you might expect.

Where to begin? The man on the moon! Humans are born with a preference for looking at a human face and will choose a face over other shapes. In fact, humans will see a face at the most basic pretense this explains why most of us see a human face on the moon. Many were convinced the planet Mars has statues of humanoid aliens when it was nothing more than opportune shadows on the red planet. The need to see a human face is reflected in the newborn visual field being about the distance between where the baby is when he or she is nursing and his or her mother’s face.

Faces are so important to humans that a special region of the brain, namely the Fusiform Gyrus, is dedicated to facial recognition.

To appreciate this region of the brain that is located at the bottom of the temporal lobes, I need to take the reader through the visual pathways. When an image hits the retinas, the light is transformed to an electrical impulse that runs down the optic nerve to the place where the optic nerve synapses with the next nerve. This part of the brain, found on the bottom of the thalamus, and is called the Lateral geniculate nucleus otherwise known as the LGN. The LGN has six distinct layers of neurons and these layers correspond wih different tyypes of neurons and different purposes.
The image is carried back to the visual cortex that is found at the back of the brain in the occipital region.

If someone has damage up untiol this point, they are blind.

From the visual cortex, the image gets transmitted to various regions of the brain to determine (in general) where, when, and what the image is.

We are looking at what and the image will go to the facial recognition area on the Fusiform Gyrus.

If there is damage between the visual cortex and the fusiform gyrus, the person cannot recognize the face. This is called Prosopagnosia.

Things get even more interesting as the image is identified as a face gets transmitted over to the limbic system and the amygdala senses whether there is an emotional response to the image. If there is damage the person recognizes the face but thinks it is an imposter because they aren’t feeling the emotional response that is normal and the most logical conclusion for these people is to think their loved one has been replaced with a stunt double or alien (like in the movie Invasion of the Body Snatchers which was better in the remake.)

There is a word for this! Yugen 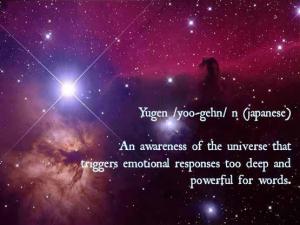 I am often found in a state of childlike wonder at something in the Biological sciences. Whether I’m staring at the canopy of an old red oak or marveling that peptide chains fold into uniquely shaped proteins without added energy but using Van der Waals forces or hydrogen bonding (or disulfide bridges.) I feel a sense of wonder and natural enchantment that leaves me without words. I recently discovered there is a name for this. It is a japanese word, Yugen.

Posted in Biology Awesomeness, My faith and my science coexist peacefully, Uncategorized

Sandy and Slowing Down (introduction) 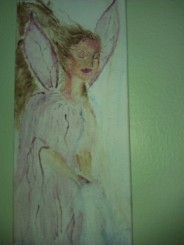 Faerie is my latest work.

This season has been a busy one for me and I have had precious little time to work on building this blog but the storm with the given name Sandy has given me the rare opportunity to slow down, take a few relaxing breaths, and pen this introduction.

I am Debra Baker and I live a crazy awesome life in one of the most beautiful parts of the best country on the most hospitable planet known to humans. Both hemispheres of my brain are equally active which translates into an eclectic person that loves science, life sciences in particular, and I also have a deep need to create or at least to attempt to create beauty in the form of painting, gardening, and writing.

I just earned my Masters in Biology and am teaching Biology to non-majors at Delaware County Community College and I really suck at teaching but I love my students and love Biology and am learning from my mistakes although I’m not sure that I will be offered spring classes. Time will tell.

I have organized this blog into categories so my worlds can coexist without cancelling one another out.

Posted in Biographical Information, Biology Awesomeness, Links to other places I either like or have captured my interest, My faith and my science coexist peacefully, My flavor of Christian

Stuff That Needs To Be Said

Sporadic blogging about a myriad of topics

These words are mine, please opine!

Notes on life and maybe even something interesting, one day.

What it's like doing a PhD with disability or chronic illness

The Upside Down World

Keeping It Real ~ Homeschool Adventures and Other Tall Tales

Thoughts of a former Quiverfull daughter who left the fundamentalist homeschooling lifestyle, got an education, and learned a different definition of "worldly."

Samantha Field
When The Abuser Goes To Work...

"We got the sky to talk about and the world to lie upon."